ESBC hoped that employee satisfaction surveys might help pin-point the issues with precision. Their previous surveys (conducted several years before) had achieved a response rate of 40%. Although this response rate may have been enough for many companies, they felt that a significant increase in the response rate would be essential if commitment from everyone was to be achieved to act on the results.

Heawood initiated an extensive internal marketing campaign to support the survey, including: 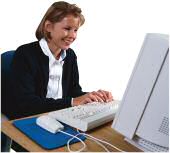 Heawood used both paper and an on-line survey, hosted on its on website, with invitations to participate distributed by e-mail from the Chief Executive with a 'click here' link for all those with web access and a paper survey for those without a computer.

The survey was left open for 4 weeks, and reminders were issued each week. Heawood also developed and supplied a range of humorous posters which they changed each week to maintain interest in the survey.

The response rate was considered to be extremely good, reaching 64% overall with 46% from the paper survey and 82% from the on-line survey. This demonstrated that staff were responding to a request for involvement.

Heawood presented the results to the Senior Management Team as well as to the Learning and Development Group.

Suggestions were made as to changes in management behaviours that could address the issues.

It was also suggested that:

The council worked hard during the following 2 years to implement the changes resulting from the 2003 staff survey. It applied for, and successfully achieved re-accreditation by IIP.

Heawood were asked again in 2005 to undertake a follow-up survey. The Council saw significant progress on almost all criteria: