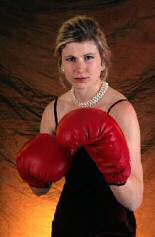 How To Be More Assertive

Managing the other
person's behaviour
by enforcing
a process

How To Be More Assertive: Part 11

When someone puts you down, a natural response is to want to exact revenge - to get your own back - or to defend yourself.

In fact, when someone puts you down, defending yourself usually has the opposite effect: it has a negative impact on both you and the other person.

The origin of put-downs is an insecurity in the other person: they want to make themselves feel good by making you look bad. This relies on you responding in a way that makes them feel good, and you going 'on the defensive' does just that. Put-downs rely on a reaction from you.

Your main aims, when responding to put downs,are usually:

Here is a recommended strategy for dealing with put downs:

It follows that you should never use put-down behaviour yourself. If you feel the urge to do so, then you'll need to learn to value yourself more, so that you can overcome the insecurity that drives such behaviour.

How To Be More Assertive:
Part 12: Texbook Techniques